Zen Peacemakers and the Homeless

Posted on September 27, 2014 by dkatiepowellart

If you haven’t read Zen Peacemakers, the blog about Bernie Glassman’s order based In NYC, the blog is very good.  This week they are focusing on homeless in the form of Richard Gere, who made a movie with Oren Moverman about this issue, near and dear to his heart also, Time Out of Mind.

NYFF Report: Richard Gere Talks About Wandering New York Streets as a Homeless Man for ‘Time Out of Mind’ 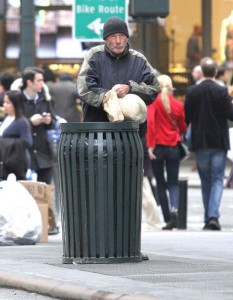 “The next time you pass a panhandler on the street that looks like Richard Gere, pause and take a closer look because it may actually be Richard Gere. Earlier this year, the 65-year-old actor spent several weeks on the New York streets shooting Time Out of Mind, in which he plays an elderly alcoholic who becomes part of the city’s homeless population. Wearing a black-knit winter hat and clutching an empty coffee cup, Gere approached actual passers-by and asked for spare change while director Oren Moverman (Rampart, The Messenger) filmed the interactions, often from a block away. And, amazingly enough, nobody recognized him.”