On a drive back from the coast on Highway 26, the Sunset highway, Mitchell and Iwere devastated by the destruction of just two years of intense clear-cutting.  To understand how bad it is, you need to see it.  It looks like a rape, like a bomb went off and demolished everything in its path.  This is not like logging of old; this is a slash and burn and demolish absolutely everything so that there is nothing left but dirt covered in herbicides.

Fishermen know it ruins the waterways, killing all the amphibious life with an excess of debris, silt, and herbicide.  Clear-cuts literally kill our fresh water outlets, making them unusable for humans or wildlife.

“One herbicide, hexazinone, is very controversial. It persists in water and soil and is harmful to aquatic life and possibly to humans as well. According to biochemist Robert Stack of Angels Camp, hexazinone has been banned in several European countries and is a possible estrogen disrupter. Sierra Pacific Industries (SPI) used 1,764 gallons in the Mokelumne watershed alone in 1999, according to an SPI-funded report from Foster Wheeler Environmental. Another herbicide used is 2,4-D, which contains dioxin.”  Newsletter from the Foothill Conservancy. 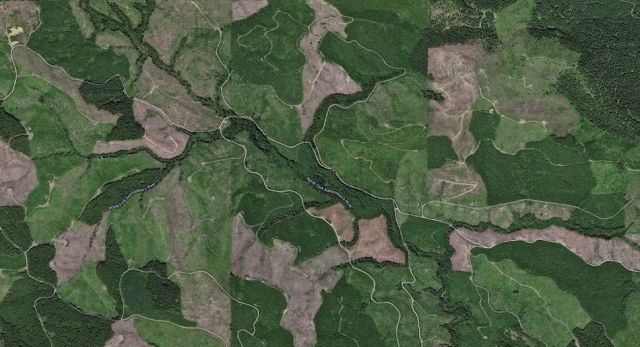 The Google images above and below are from two years ago.  Imagine the dark green forest space wiped out by another 50% in the map above, which is my guestimate.  (Imagery ©2014 DigitalGlobe, Landstat, State of Oregon, USDA Farm Service Agency.  Map Data ©2014 Google)

There are billboards along the highway which speak to Oregon having a law requiring replanting.  The campaign about how the companies are required to replant is a cruel joke to make the people driving past the billboards feel better about the devastation.  Look at it this way: In a healthy forest, there is a dense undergrowth suitable for growing trees, among other things.  The soil is acceptable, the tall trees overhead keep the seedlings from being burned by the hot sun, and the seedlings are numerous so if trampled their species guarantees new growth.  In a clear-cut environment, only plants that grow in hot sun in packed soil saturated with herbicides can survive, so the mortality rate for a tree is quite high.  On some slopes, the trees never grow back.  When they do, or the very best scenario, you have a tree farm, not a forest.  It is never a forest. 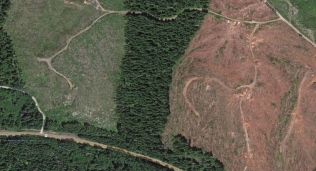 Send a letter to tell Oregon’s U.S. Senators and Representatives, Governor Kitzhaber, the Board of Forestry, and the timber industry that you want to see more clean water, salmon, wildlife, and recreational opportunities from lands in Oregon – not more clearcuts.

A final irony.  The Camp 18 Logging Museum & Restaurant (42362 U.S. 26, Elsie, OR 97138) sits in the middle of the worst clear cutting views imaginable.  A proud testimony to those who gave us this great technology.

BTW, if you Google most of this, you will get various Logging lobby’s ads which counter the real science.  For the real science, I suggest you read the following, not all biased, though some are:

My images and/or this blog may be reposted as long as there is a link back to zenkatwrites.  Images not indicated as someone else’s are ours, and you are free to use them for any anti-clear-cut blog.
Image of clear-cut operation courtesy of Klamath-Siskiyou Wildlands Center.
Imagery from www.google.com  ©2014 DigitalGlobe, Landstat, State of Oregon, USDA Farm Service Agency.  Map Data ©2014 Google.
I read the long legal document and believe this is an appropriate use of the images, however, if I am in error I am happy to remove them.