Apple Has Hired PC Programmers, For Sure

Posted on March 5, 2014 by dkatiepowellart

A RANT, or, one highly competent user’s experience with Maverick.

I am beside myself in 100 ways over my updates on my old beloved Mac Pro.  I was a PC user for 20 years and when I moved to Mac, I fell in love.  Gone was the Gestapo thinking.  Gone were the belabored commands and endless windows that had to be opened in each program to do the simplest of functions.  Gone was the inability to set up your computer the way you wanted it to work!  It was all so easy-peasy; I set up my computer to suit our business.

Safari was running slow, and Vimeo and a couple of other sites suggested it was because my operation system was old.  I called Apple and they suggested I update to Maverick.  They looked over my computer and said this would work well for me.  I’ve never been steered wrong by Apple before, but I still read the reviews.  Not bad, and most of the worst seems to be on MacBooks, not Mac Pros, and most had to do with download time.

I downloaded it.  I have been crying ever since.  And I bet my next computer that they hired PC programmers.

Let’s talk about one small command that is in every software program but now has disappeared from Apple software:  “Save As.”  I think I use save-as two dozen times a day.  In Preview I might be web-formatting  and then save-as to my web-formatted nomenclature.  When doing estimates for multiple similar items I use save-as to allow me to use one basic estimate then tweak each for the individual item.  Now I must duplicate then go in and rename — HOW STUPID IS THAT?  Three commands for one?

Let’s take pages.  They used to have that little box you could zip out-of-the-way but keep open, ‘Inspector.”  (I called it the idiot box, but it was said with affection.)  Inspector allowed me to change things quickly without taking up desktop space.  The commands were simple and all there in teeny formats, very graphic and very cool.

NOW I have this whole side panel called format, looking much more like PC command boxes, large and belabored (I think they are in love with taking up space.) The damn thing doesn’t do what inspector did half the time.  Old commands are called by new names.  I don’t mean it has a new bell and whistle I have to learn — THAT WOULD BE FINE WITH ME.  I mean, they changed the name of the “steering wheel” on your car to the “round directional moderator”.  THIS TYPE OF THINKING IS EXACTLY WHAT PC PROGRAMMERS DO TO PRETEND THAT THEY DONE SOMETHING NEW WHEN IN FACT THEY JUST MADE US ALL GO OUT  AND TAKE CLASSES TO FIND THE SAME OLD ITEMS UNDER DIFFERENT NAMES.

Trust me, there is no one who actually cares about their time that wants to learn the new names or the new way of doing the old thing.  IF IT IS NOT BROKE, DON’T FIX IT.

Pages:  We do many estimates in a week.  Sometimes we have to create a separate estimate for 10 chairs which are the similar, as in individual projects for institution.  Each chair has a different set of items to be repaired, but many items are repetitive (they all need to be waxed.)   So we use an estimate sheet (ours were created by me, formatted for the various types of projects, to save us time) and each uses a table with very pale colors to indicate certain activities (materials, upholstery, woodworking) and has functions all ready to go.  We plug in the numbers, and it tallies for us.  Our old Pages formatted estimate is on the left, and the “new” on the right (I say “new” because I will never use this — I will be recreating these documents in Adobe.) 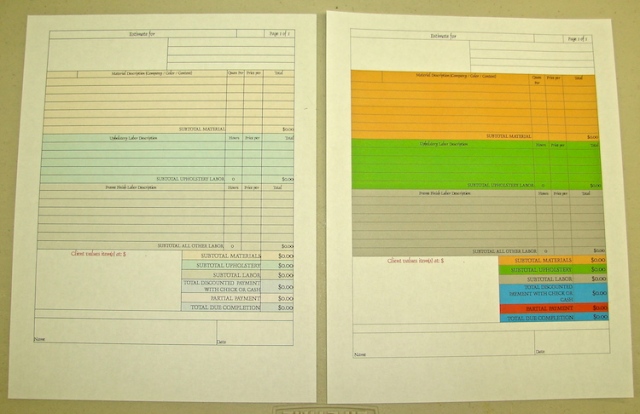 Right off, notice that I CANNOT use a pale color — I chose the palest colors available to me for the fill on the cells.  I guess someone brought their 5-year-old to work that day and the kid chose the colors, as they are pretty, but distracting from the black writing beneath.  I tried finding a place whereby I could create a palette and cannot find it.  I looked for the various versions of color formatting graphics that sued to be typical of Apple, but it is not connected to filling a cell.  I am stuck with kindergarten colors!

Then there is the small item about not being able to support a jpeg inserted into the cell.  If all the chairs are scrolled Victorians with a needlepoint seat, images of the item is worth a thousand words.  The small identifying images went into the large square on the bottom left.  The Apple techie on the phone said his would work in Pages 5.1, but trust me, and I sat there on the phone with him while he mocked me, but I could not drag, paste, ANY jpeg, no matter how small, into that cell.  The notice said it was NOT SUPPORTED.   This is a problem for the client and for ourselves, as this is part of a legally binding agreement.  So I guess I will use Adobe or gads, buy word for Apple?  How sad.

So some yahoo at Apple said that putting jpegs into cells was an unnecessary function.  He suggested that we put it on a side bar or the top or bottom.  But many of our estimates are ONE PAGE, and we like it that way, and I worked hard to format a complicated estimate that would read on one page, perfect for meetings.  So, again, the Gestapo programmers have been let loose, knowing what is best for us, which I believe is simply because they need an excuse for the poor programming choices they made.

Now let’s talk about dropping images into a normal Pages document.  I often create reports that have 3-6 images with text per page.  It has always been a nice feature of pages that I could place my cursor exactly where I wanted the image to go and hit paste, and it went THERE.  Then I could format it with that tiny window buddy, the Inspector — or not, if it needed no formatting but allowed it to sit in line.  Now, I tell it where I want it and it lands where ever — I have had to scroll up and down to find the damn thing.  And the embed right command is not apparent — I still haven’t found that but I HOPE they haven’t assumed that everyone wants them embedded only on the left.  This means they are really programming Nazis.

iPhotos won’t let me move many of my normal images into it for editing.  They are jpegs, same old jpegs from the same old camera or scanner that I have used for-frigging-ever, and now it says that this is not supported.  It also takes about 15 minutes (NOT KIDDING) to open the program now, and even editing on it is laborious.  I am moving over to Photoshop daily.  Trust me, if Photoshop is faster to open and operate than your own software, that is pathetic, as Photoshop is a monster program with great capability!  At some point I may just remove the Apple software and use all Adobe products.

Now the real reason I know that Apple has hired PC programmers is this:  Apple software now overrides my preference commands, and some options have even been removed.  I tell it not to autocorrect, and each time I reopen a program it autocorrects — incorrectly, I might add.   Apple has always assumed its users had brains.  (On a PC you want to delete an image and it asks you, “Are you sure you want to delete this image?”  “yes” you click.  “Are you really, really sure?”  “YES dammit!”  PC programmers in general think users do not know what they want.  Now Apple software appears to assume its users don’t know what they want, ergo, Apple has hired PC programmers.

So now my husband gets to hear me curse Apple every 15 minutes; sometimes I am so damn mad I have to take a walk because I want to put it through the window.

Oh and by the way, it is SO SLOW I cannot work on it, so the whole reason for updating to Maverick is wasted.  I asked if I could return to the old operating system, and nope, no way.

BTW, my next computer may be a PC.  Why spend the exorbitant rates for a Mac when they are screwing up the software that used to be so beautifully graphic and easy?  If i am going with Adobe software why not use an HP and be annoyed with the stupid operating system for $500 instead of $2100?  They have really lost a fan here.

Rant, Round Two is found here!

12 Responses to Apple Has Hired PC Programmers, For Sure